RSS Feed
← Any last words?
I think I should absolutely be on the Entertainment Committee for Rio… →

Back from the Boro & feeling fine

Back on full power after dipping my toes in the north bay of the homeland.  Not much live wildlife to be seen in the rockpools, but The Bear did find a Peugeot key ring – no car to go with it though.  Childerbeast also had a good lesson in tidal education when they almost got cut off because they weren’t listening to me.  Eventually coaxed them back to safety, despite their insistence that they check out some other rocks.  I asked them to count while they looked at the sand island they had just been on –  20 seconds later, it was gone and I got to say “See!“

Watch out for that incoming tide kids

Didn’t venture into town at all this visit.  In all honesty, the calibre of grockle I witnessed, excessively drinking at 1030 on the train on the way there, put me off going anywhere near any touristy areas.  Incidentally, most of them boarded the train at Leeds!  Usually I’m more than happy to slate the Wezzies, but I’m afraid they might set Nicola Adams on me, and I need way more time on my shed punchbag before I’d be happy to take her on!

Spent Wednesday in Whitby introducing the MiL and childerbeast to the brilliance of Whitby Museum.  You may remember I raved about this place after our 2011 Residential visit.  I was keen to share the joy and have another look around.  Frankly, anywhere you can see a stuffed crocodile in a patriotic waistcoat holding a Union Jack flag is worth the £4 door tax any day.  Well worth a visit just for the fantastic Fossil collection, even some from the (you couldn’t make it up) Kirkdale Caves excavation, when a veritable Noah’s Ark of animal bones was discovered in a cave near Helmsley!

This time around I got to see so much more and the staff were fabulous.  Notable in their absence last time we went (doubtless barricaded in the staff room hiding from us and our hoard of 2-dozen 11 year olds!)  This time, they couldn’t have been more helpful and friendly.  Even the big cheese was brought out of his office to chat to us after the MiL commented that the museum was not as well advertised as it should be.

I stuck my two-penneth in about the glaring omissions from the gift store – namely; miniature Tempest Prognosticator key rings; replica but working Truant’s clog and a Hand of Glory backscratcher/ashtray/tealight holder/earrings etc.

In fairness, he didn’t flinch and even agreed and said he’d already suggested Hand of Glory gingerbread biscuits in the Tea Rooms downstairs, but they weren’t going for it.  I’d totally buy one of them (& I don’t even like gingerbread!)

In the end I had to settle for a Hand of Glory fridge magnet. 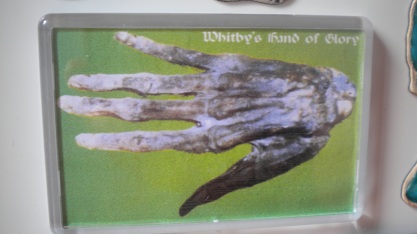 Every fridge should have one!

As that old saying goes about learning something new every day, I discovered during conversation with the MiL (as we looked at the stuffed seabird collection) that as a 12 year old she’d belonged to a Taxidermy Club.

A Taxidermy Club?  Apparently they frequented Bempton Cliffs looking for dead birds then took them back to Woodend Museum in Scarborough and stuffed & mounted them in various poses and tableau.  Now THAT is the kind of distraction for the young that you just don’t see enough of these days.    If there were more clubs like that on offer it would surely divert the bored and restless youth of today away from thoughts of wanton crime and mindless rioting during the summer holidays.  The possibilities for modern roadkill are endless.  Stuff ’em, mount ’em and get ’em dressed up:   Badger Boris Johnson (complete with harness & zipwire); Weasel Rooney with a harem of sluttishly-attired weasel hookers; Urban Fox Beyoncé;  Squirrel Nick Clegg… I could go on…   Bloody brilliant!

My distraction for the day after watching the diving this morning and the finals tonight will mostly consist of curtain tweaking as my new neighbours move in across the road.  All new fat Baldy and his big-bootied wife.  They have two young men with them (“Ooooh young man!”) and I am trying to discreetly tell if they are (a) also moving in  and (b) if they are fit or just portraying the illusion of being so.  They look quite chavvy but Hell, I’m in Tyersal here, not the Hollywood Hills and to be fair, I am also wearing shorts and a sparkly parrot T shirt.  Chavtastic!

Perhaps I need to go out and put something in the bin or tickle about in the front garden for a more optimum vantage point  (or perhaps I should just get a life!)

Not loathed by totally everyone so that's good right?
View all posts by TheDHW »
← Any last words?
I think I should absolutely be on the Entertainment Committee for Rio… →