RSS Feed
← Who will sit with me in the dark like the Mad Hatter?
I went to London & nobody called me a cunt →

I appear to be having some kind of midlife crikey lately where, despite looking my age, I actually seem to be mentally regressing.  19 on the inside.  69 (dude!!) on the outside. And it’s panicking me a bit. I’ll be buying rollerboots next and trying to get off with 26 year olds.

Look at those crinkly eyes!  Those pores!
I think I might have peaked at 34.  Although am strangely happier with my body now at 47 than I ever have before. Pity no bugger wants to see it though. 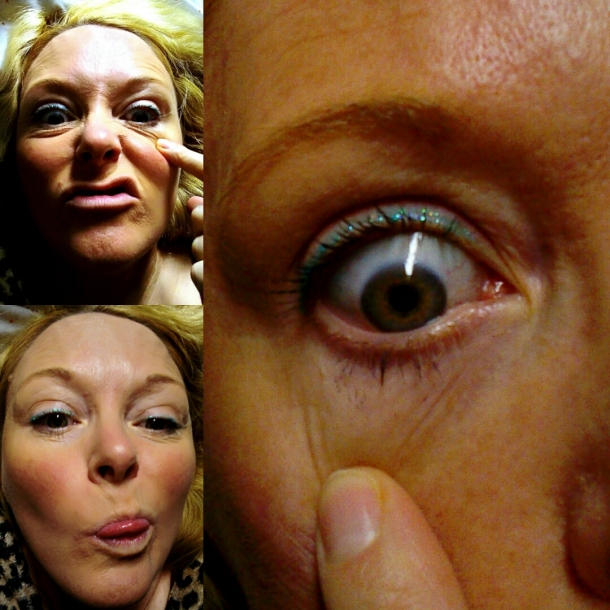 WTF is happening here? Laughing too much & gozzy-eyed squinting have taken their toll

To distract myself from inevitable decrepitude and the fact that it’s only going to get worse if I turn into one of those botoxed. boob-lifted, peroxide Patsy Stone types, I chose today to check out a local meeting (for local people).

I don’t want to get old. I’m still only mentally about 20

I follow our local area’s FB group page to see what’s what in the hood – who’s been robbed lately or had their knickers stolen off the line – that type of thing.  It’s recently gone a bit westside and has been more entertaining than the Brexit saga, all because someone has erected a chain across a snicket/ginnel/alley/twitchell/call it what you will, in order to deter rogue quad bike riders and teenage drug dealers.  This has caused outrage and much chuntering on FB. I have been following the saga on the community page with a mix of neighbourly interest, amusement, and frustration at some of the questionable spelling.

With nothing better to do with my Monday other than bemoan my encroaching slide into the domain of the desperate old woman, I decided to wander down to the local meeting for local people, which had been arranged by our local councillor and to be held, oddly, at the site of the disputed chain. I was there in a people-watching capacity only, as I couldn’t give a shit if someone has the right or not to try to stop people riding dirt bikes and quads down their back alley or dealing drugs next to their back yard.  I was more interested in who else rocked up and whether the people who had been so vocal online were there in person.

What’s all this shouting? We’ll have no trouble here!

I’d wanted to arrive on a quad, through the disputed public right of way, whilst smoking a massive spliff, just out of badness and because I’m a piss-taking, trouble causing cunt, but couldn’t obtain the necessaries at such short notice, so I just walked round instead.

There were no pitchforks or flaming torches but it was fairly depressing.  Despite the local councillor and the dude from the council who deals with public rights of way disputes and such, reminding the small crowd to listen and not argue over the top of one another, that is of course, what happened.  Everyone had an opinion. It was the usual Top Trumps local edition of who has lived around here the longest like that’s a badge of honour rather than a poor life choice or a rut you are now stuck in.
The poor woman who was responsible for the drama spoke up to explain herself and I couldn’t tell you half of what she said because guess what? people were talking over her to each other and not listening.  Too busy chuntering and grumbling about losing their short cut.

I was asked twice whether or not I even lived on the street. I said no I didn’t, I lived around the corner and was there purely in the interest of sociology and psychology and that thus far I had not been disappointed. I did speak up when a couple of people were a bit mean after the lady had gone back inside her house.  But of course they were – people are mean – it’s human nature, unfortunately.

Several people had even arrived in vehicles, which led me to think about how local they actually were if it had warranted a drive but that…like the chain fence, is none of my business.

Meanwhile, the Bman is back from his weekender in Manc (which was initially only an evening), so I no longer have the bed to myself.  If he snores I may have to adopt this approach. We’ve tried everything else.  Snore pillows, nasal strips, mouth guards, punching him in the ribs.

It could be a win-win situation for me.

Not loathed by totally everyone so that's good right?
View all posts by TheDHW »
← Who will sit with me in the dark like the Mad Hatter?
I went to London & nobody called me a cunt →