A night at the institute

At the start of the year my friend and I embarked on our first ‘ghost hunt’ together and now we’ve been on about 6 and are no more informed than when we started.
I do get asked why we bother, but to be honest, they can be huge fun, as long as you don’t mind the dark and occasionally mixing with people who believe every last belly gurgle or door creak is proof of life after death.

I’m not scratching my arse with my torch – honest

Friday night we went on another one, this time at an old building near Keighley.  We arrived an hour late by mistake and they weren’t expecting two women – the only missing name on their list was a Dave Subborn.  Feck knows who he is or why his name was associated with my email booking and my deposit.  Must be paranormal!

We were snuck upstairs by some of the staff to the chapel area where the 26 strong group had already started (including a 10 strong hen party with sashes and veil!)  They were all holding hands in a circle and attempting a ‘human pendulum’.  For the uninitiated, this is essentially someone standing up inbeweteen 2 other people and the spirits are then asked to push the person in the middle either forward for Yes or backward for No. (#notconvincedbyalongstretch)

The man doing all the calling out seemed to have a military background, possibly in the inquisitorial squad at Guantanamo Bay.  “Are you a male? Yes or No”, “Are you from this building? Yes or No” – as he marched around the circle barking his questions. “Do you mean us harm? Yes or No”, “Do you know you’re dead? Yes or No”.  He continued marching around the circle, occasionally tapping someone else on the shoulder to have a go at being the human pendulum.  At this point my friend whispered that it was like a really slow version of Duck Duck Goose and that it was also a bit like he was playing Guess Who, as she whispered “Are you wearing a hat? Yes or No” and then dissolved into barely suppressed giggles which then set me off.  Both of us sniggering away in the dark, trying to pretend we just had a cough.

After a bit more of an explore, it was break time. Like being at a very strange wedding reception, with a running buffet of various sandwiches, crisps and cake, some of which ended up a bit soggy after my pal spilled her coffee over it when I made her laugh.

We checked out various areas of the building.  A small theatre, a swimming pool (now boarded over).  We did ouija boards, where strangely a Dutch woman came through and as if by magic, one of the staff members, spoke Dutch.  Everybody felt freezing but the room temperature was steady.One lady left the room because she felt sick and I almost fell asleep (nothing new there).

Time for another tea break, where for reasons I forget now, we ended up laughing hysterically about whether anyone had ever investigated Martin Bashir as a serial killer – the Harold Shipman of the showbiz world.  This led onto reading online about a conspiracy theory that Oprah Winfrey or Jeffrey Daniels of Shalamar may have had Michael Jackson killed.  One to further their status in the Illuminati, the other as vengance for stealing their dance moves.  I’ll leave it up to you to work out which.

After a bit more investigating.  Another fruitless ouija session and then an equally pointless game of boggle with the spirits where we had to make up our own answers the questions asked – Countdown style.  This was clearly open to abuse.

By this time, I’d pretty much had enough and it was 3am.  Time to set up camp – yes, this time it was a full sleepover.  Just time before bed to recreate the famous death scene shots of the Heaven’s Gate Suicide Cult evidence photos.  Like you do… 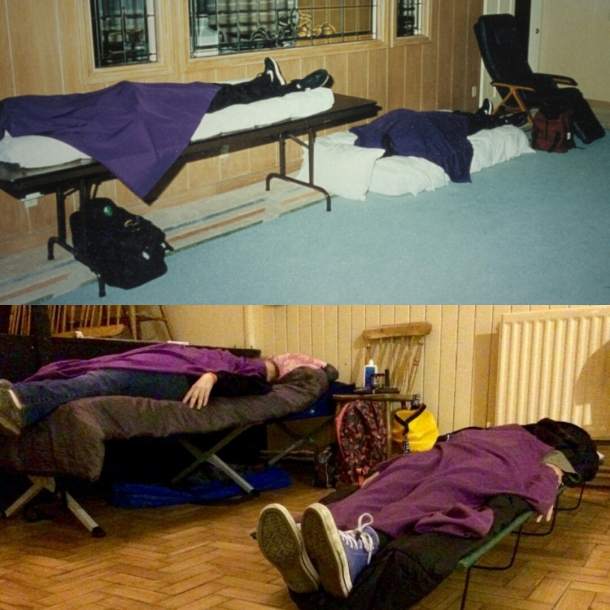 I think we need to grow up and stop arsing about

I got about 2 hours sleep before we got turfed out and then spent the rest of Saturday feeling almost jetlagged.

All in all I think the most entertaining things of the entire evening were us two. The rest of the group were nice and all but the spirits were nowhere to be seen or heard – I didn’t even get so much as a tingle of the old spider senses really and when I tingle, you know shit’s about to go down.

Doing it all again next Saturday at Armley Mills, where I’ve seen and heard strange shit in the daytime, so lights off should be a right scream.

Who ya gonna call?