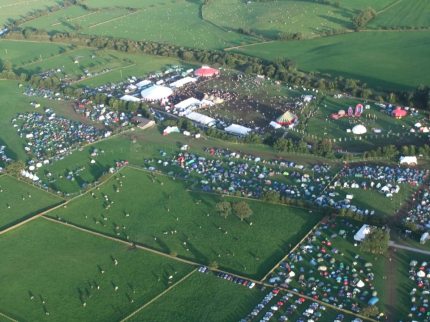 Aerial shot of Beacons (obv. not taken by me)

Back from  Beacons Festival 2012 with the Crap Posse and about to head off on Thursday to Shambala! (Which Bman insists on calling Shangalang and asking if I am going dressed as Woody from the Bay City Rollers) 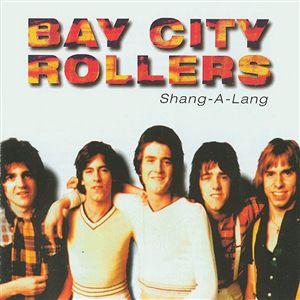 I seem to be spending swathes of my summer holidays frequenting portaloos.   Magic Loungeabout’s were not bad but Beacons were shocking and far too few!  ‘Brimmage’  & ‘Overflow’ were the words of the weekend! You know they’re bad  when you catch the toilet emptying man (who must surely be used to that line of work) dry-wretching after he’d opened the door to one particular loo!  Complaints were made and feedback left on the website. I’ll let you know about Shambala shambaloos, but I have high hopes for the self-composting long-drops!

It wasn’t all piss up to the rim of the bowl & empty loo roll though (yuk!), I actually saw a band I wanted to watch without the children and it was after 10:30pm!  To be fair, I didn’t drink as much as I’d have liked to on this rare night out as I had the fear of needing a wee every 15 minutes!

Toots and the Maytals @ The Stool Pigeon Stage – Sunday night. 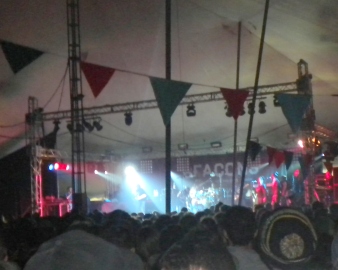 We have the bunting, as proof that we were there!

Thanks to The Crinski I also discovered Maya Jane Coles (Cheers Crin!)

I was asked to leave the dance floor at the Ladybird Project Dance-Off.  My moves were not good enough.  My littlest was good enough though and won a First Prize rosette for the duet section.  She gets her moves from her Dad!

We also discovered a Flagarinth & a wall of mirrors – how much fun can you have in the rain, bobbing up and down laughing at yourself? 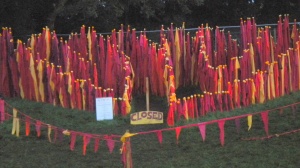 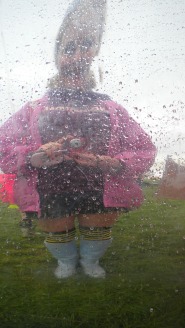 We juggled; we danced; we ate ice-cream late at night.  The childerbeast played clown cricket with water balloons and were taught how to ‘chase the dragon’ (but not in a Zammo way) – it was a just a game with a poor choice of name!  Much laughter was had round the camping stove with the  Aconley-Ferdinandos and their losing things that they had all the time and drunken lectures on coats and ties!  We pondered and mourned the death of Bruce Forsyth, which turned out to be a festival rumour, begun at the Impossible Lecture tent, presumably, to spark discussion on who would now take over on ‘Strictly’ (and a spate of festival goers in Brucie masks the following day).  We sat on sofas & watched a ‘Pendurance Test’, where grown men and women competed to see who could be first to get a biro to run out by scribbling on pieces of paper.  I didn’t get to see who won or what the prize was (a new pen?), because we were ejected from the marquee when 2 of our company lit up cigs! 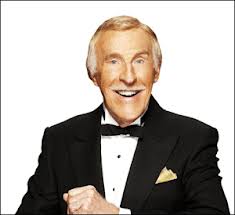 It rained.  It was sunny.  The mist rolled down from the hills and made the site look eerie.   There weren’t enough lights in the camping area, making the spider-web of tent ropes a mission near impossible to negotiate after dark (& a few wines).  However there was a bouncy castle Koppaberg disco!  What more could you ask for?  (Oh yeah – more toilets and some better lighting, and a larger Family Area not right next to the drunken piss-up, foul language  brigade).

There was the usual festy oddities aplenty in the form of random gifts of spring onions; wandering theatrical types; amusing tent decoration; drinking casualties and the seemingly constant hissing sound of people with more money than sense trying to get high with the aid of nitrous oxide & balloons!  WTF?  Head between the knees for a few seconds, then stand up as fast as you can and surely the same loss of brain cells could be achieved?  Difficult to explain to the childerbeast who kept finding the spent silver capsules on the ground.  “What are they mummy?”  Erm, I don’t know love”  (I genuinely didn’t, until I asked someone else!)

Maybe I’m just too old for this.  The average age of the punter at Beacons did seem to be mid-20’s.  Perhaps I should just start going to folk festivals full of beardies and Real Ale drinkers.

Highlights for me were the childerbeast in the line to refill the water carrier, saying:-  “Mum I don’t think the tap is working.  That man is just standing there staring at the tap, it must be broken.” Cue 20-something,  acid casualty seemingly thoroughly bemused by the simple operation of turning on a tap, with 3 other apparently witless punters patiently waiting in line behind him.    “Kids, step away slowly and let’s leave them to it & find another tap”.

Gav & Stace moment while Olympic-standard loafing in the giant deck chairs at the Ladybird Tent on sunny Saturday, Gill shouting to her son “OH!  JOE!” and a trio of young lads at the other end of the field yelling back “ALRIGHT NESS, YOU ALRIGHT?”

This tent amused me every day when we walked past it to get into the main arena:-

I dread to think what his eHarmony profile says!

In the style of the man at the water tap, I stared at this sign for far too long in the ‘Herd of Cats’ healing area, thinking, “What are The Rapies?”

or… there are pies…

Who’s that over there? 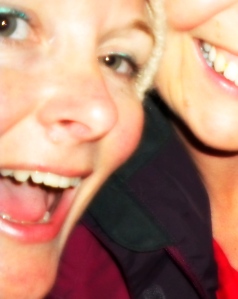 Sunday night was entertaining, when the main arena shut at midnight so 3,000 campers had to find something to do until the wee small hours rather than dance the night away in a marquee!  At one point I saw a large 6-8 person dome tent being carried aloft by several persons down the hillside, spookily silhouetted  by the floodlights near the toilet block.  It had the look of a giant multipedal beetle.  (Is multipedal a word? If not, it should be).  People were cheering as it made its way to the foot of the hill.  We nicknamed it Bruce Forsyth’s funeral pyre. (At this point we were still unsure whether he was actually dead or not)

Such drunken high jinx continued for a couple of hours and then it went suddenly quiet, like all the Strongbow had run out and the nitrous oxide had worn off and everyone crashed unconscious after 3 nights of solid partying.

Have to say, fun times aside, that a low point was the horrendous mess that the majority of the punters left behind, even though they were provided with binliners for their rubbish.  Despite the Programme specifically requesting that the site be left as they found it and nobody leave tents and stuff behind.  This is what the area looked like near us.  Suffice to say the Family Camping zone (all 20m square of it!) was left pristine without so much as a dog-end or a bottle top left behind. We made sure of it!

FYI – we witnessed the yellow tent in this picture being used as a toilet by at least one girl, who had a shit in it at 11am Monday morning as we were packing up!  Skanky dirty minging young ‘uns! 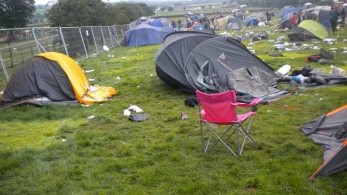 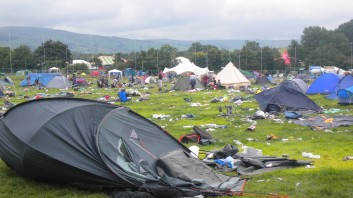 That tent looked brand new when those kids put it up!

I wasn’t looking forward to de-camping and heading home by train, but then the Bman rode in to the rescue on his shining steed (AKA bog-green Skoda) with an unscheduled day off and drove to Skipton to collect us.  Happy happy joy joy!  Stuffed the soggy, muddy tent in a bin liner and threw it in the boot, ready to dry off on the line back home.  Genuine!

Clothing all washed, dried and ironed and some of it repacked ready to hit the road again on Thursday to Northamptonshire.  Rumours abound that a certain Mr DTR might be joining the shangri-la of Shambala.  I’ve warned him that if he wants to meet me at Ladies Night on Friday he will have to drag-up!  He says he’s all over it!  (I dread to think – I’ve seen some of his FB pictures, and they were just him in his back garden!)  🙂

Will only have a day back at the ranch after this gig before I head to Chester Y Fronts to collect the childerbeast who will be spending the next 9 days at the Moss with my folks.  Suspect M&D may well tire of grandparently duties after much less time than that!  Will have couple of days there then back here for the last weekend before the September term starts!  October half term I think I will mostly spend doing not a lot at all after this rampacked 5½ weeks!

In other news, I am getting a new phone delivered tomorrow.  I am entering into the arena of the 21st century and getting an ‘android’ phone.  I don’t know what that means, but I am hopeful it will be able to do that knife between your fingers trick like Bishop on ‘Aliens’ and also bring me meals and cups of tea.  So apologies if over the next few days I either ignore your texts, ring you by accident during the night or don’t know who you are when you call.  I’ll be busy trying to work out how to use the fucker!

So call me baby, here’s my number!